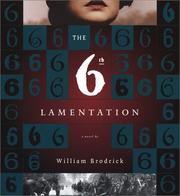 The plot of William Broderick's The Sixth Lamentation hinges on documents supposedly kept in the secret archives. It is a fiction, of course, but the details closely parallel many recent This book, The Sixth Lamentation, and its companion books,The Gardens of the Dead, and A Whispered Name, were charming on two counts--elegant and beautiful prose, which cannot fail to please--and then, the carefully wrought plots, each one presenting our Father Anselm with a conundrum that only he--with his double expertise of priest and lawyer--can  › Books › Literature & Fiction › Genre Fiction › Historical. The Sixth Lamentation was one of those rare books that I didn't want to end because I was so enjoying the sheer experience of reading it. Some reviewers here have said that the book was too slow and it is slow--don't expect a pot-boiler. This is a book about emotion, contemplation and truth rather than ://   The Sixth Lamentation (Father Anselm Novels), Brodrick, William, Good, FAST Del. £ P&P: + £ P&P. Similar sponsored items Feedback on our suggestions - Similar sponsored items. No obvious damage to the book cover, with the dust jacket (if applicable) included for hard covers. No missing or damaged pages, no creases or tears, no  › Books, Comics & Magazines › Fiction.

About This Book In this brilliant debut novel, William Brodrick draws upon his experience both as an Augustinian friar and as a practicing lawyer to create the unforgettable character of Father Anselm, a monk who must search the darkest corners of history to try to fathom the human capacity to do :// My first novel, The Sixth Lamentation, deals with two time frames. The first presents the exploits of a group of Catholic students in Paris during the Nazi occupation of World War II. They call themselves The Round Table and smuggle Jewish children to a monastery in Burgundy. The students are betrayed, and only one person survives Agnes Aubret. The second time frame begins 50 years :// Perfect for fans of Hilary Mantel's The Mirror and The Light, Matthew Shardlake is back in the sixth book in the Shardlake series, from number one bestselling author C. J. Sansom. 'When it comes to intriguing Tudor-based narratives, Hilary Mantel has a serious rival' - Sunday Times ‘Sansom has the trick of writing an enthralling ://   Lamentation review – CJ Sansom’s new Tudor mystery As grim as Horrible Histories and darker than Hilary Mantel’s novels – the sixth in the Shardlake series Alfred Hickling